It may be a bear market but it’s not a bad time to get into Web3 and blockchain with an average global base salary of $128,606. On average, professionals in the crypto-asset industry make significantly more than their peers in Web2. Now, If only there was a resource like Glassdoor (but for crypto) to help companies and potential employees make better informed decisions about working in our industry…

As part of our platform initiatives to support the success of our portfolio companies, we have identified that, for the relevant industries we invest in (blockchain, DeFi, Web3, etc.), there is no “go to”, let alone sufficient, database for salary/compensation statistics. Providing access to such data would serve our portfolio companies, and perhaps the industry more broadly, in making better hiring and compensation decisions, and in turn lead to greater success.

With our Portfolio Compensation Survey, we have sought to address the lack of such a resource. We acknowledge that salaries change fast in the Web2 space and we know first hand that Web3 salaries have a tendency to change even faster! We’ll conduct this survey bi-annually to provide our portfolio companies with current data in increasing degrees of granularity.

For our first Compensation Survey, we took a look at 15 geographically distributed startups in the crypto space. The companies surveyed vary from teams of < 5 to companies 115 plus, Seed to Series B investment stages, with 87% of personnel being fully remote.

We compared our sample of 224 crypto engineers across the globe with that of Carta Total Compensation (primarily Web2 data) in the $25-50mm market cap peer group and this is was the result: 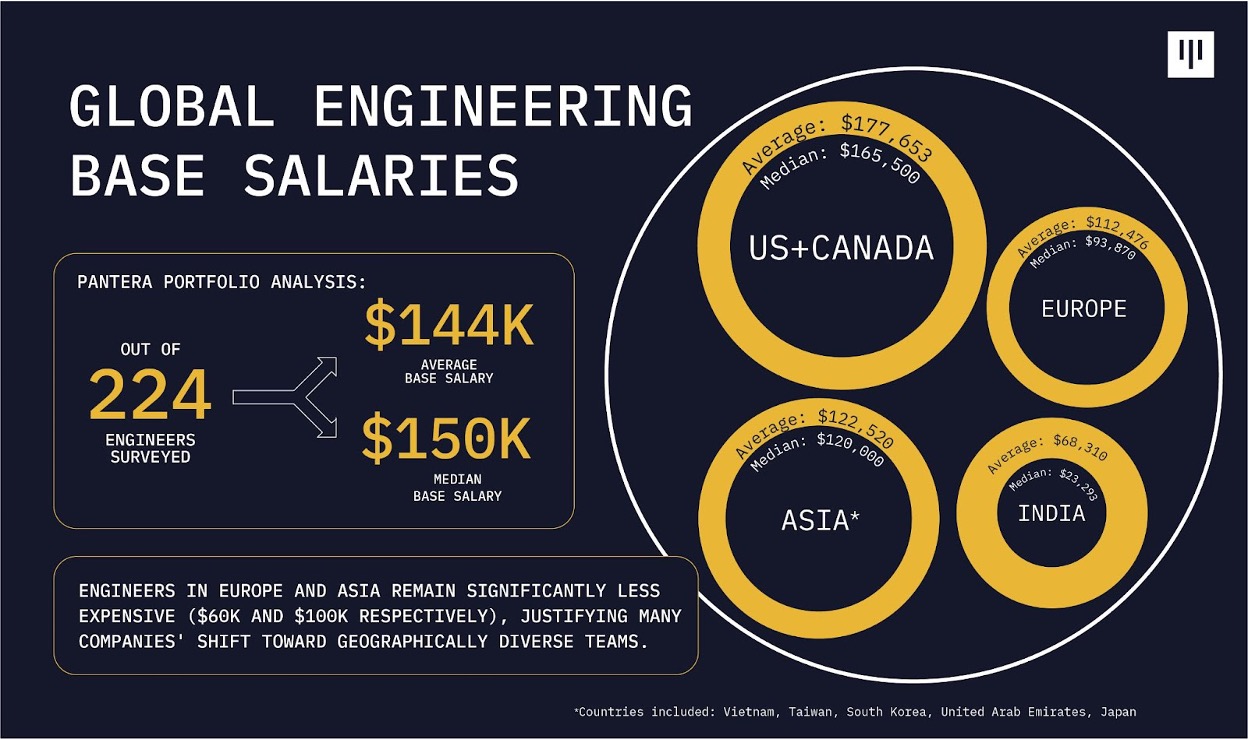 We found token incentives particularly interesting, with the average token package totalling at $341,157, with a median of $87,500. We initially thought this made sense due to the variety of stages of the companies surveyed, but after taking a closer look, there does not seem to be a clear industry standard around token incentivization. Our own Lauren Stephanian said it best in a blog post on token incentivization earlier this year.

According to Carta Total Compensation data ($25-50mm market cap peer group), the base salary of CEOs of 506 Web2 companies was reported as $283,000. According to our survey, the average salary of a Web3 CEO was $192,957. While this roughly $100K differential seems significant, keep in mind that Web3 CEOs have a significant upside potential from equity and ownership of their project.

Here’s the data we collected around marketing, finance, and product:

While this sample size is relatively small, we believe it is enough to glean some insight into appropriate compensation packages for various roles in the crypto-asset industry. We will continue to iterate on these surveys on a regular basis to provide the industry verticals in which  we invest with more transparency. In the surveys to come, we will provide even more in-depth analysis into token incentivization structures and more.