“There are decades where nothing happens; and there are weeks where decades happen.”

We’ve seen unprecedented use of the word “unprecedented” lately. So, I will skip a listing of the unprecedented and interesting things that are happening and only focus on our core theme:

The unlimited printing of money will push up the price of things whose quantity cannot be eased.

As economists try to get their heads around the magnitude of this, there has been an escalating series of statements like “this deficit is the worst since 2008”, “…the worst since WWII”, “…since the Great Depression.”

That tsunami of money will have a large impact on many things. In our markets it seems inevitable that it will push up the price of fixed-quantity things like bitcoin. If there are trillions more paper dollars, the law of supply and demand implies much more paper money to buy the same amount of cryptocurrency.

Bitcoin was created in a reaction to the previous money printing. The price of bitcoin has gone up exponentially during this 10-year period of what was at the time unprecedented money printing. What’s going on in the world today is an order of magnitude larger. 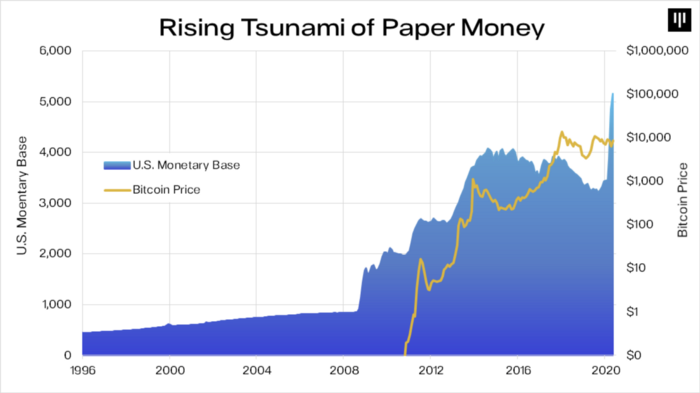 Money printing is not a precision instrument. It cannot be pinpointed to impact only one thing — like the virus itself. It acts equally on all assets. The rising tide of paper money will float all boats. The most obvious proof of this concept is the fact that stocks are essentially flat on the year — even though we’re going through a frightening crisis which is predicted to result in a shocking 70% fall in corporate profits and result in a huge wave of bankruptcies.

Even bankrupt companies like Hertz are rallying. There is no clearer sign that a wave of paper money is sloshing around than the stock of a company which has admitted it is worthless rallying and planning a public offering “to satisfy investor demand”.

The tsunami of money has increased the price of cryptocurrencies generally. We have used bitcoin as a proxy for the market because it is best known. Below we discuss how some sectors of cryptocurrency are surging even more than bitcoin. 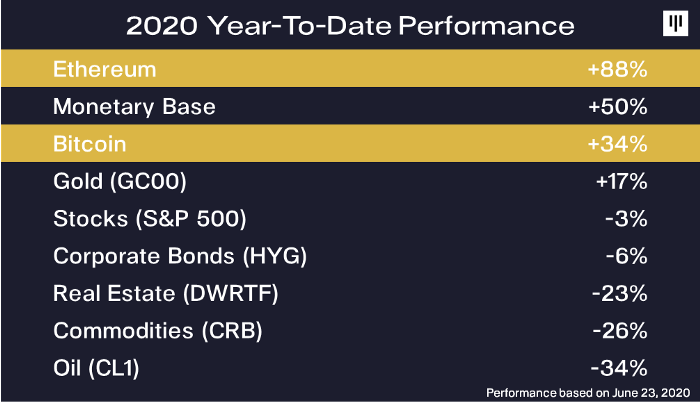 We’ve been beating the drum about bitcoin benefitting from continued monetary expansion — that thesis has played out well. Bitcoin is up +34% this year relative to most other asset classes being down. We believe we’re at an inflection point where excess liquidity pouring into the system by the Federal Reserve will find its way to fixed-supply assets like bitcoin and other cryptocurrencies — yes, “other cryptocurrencies”.

Bitcoin is not the only crypto-asset up year-to-date. 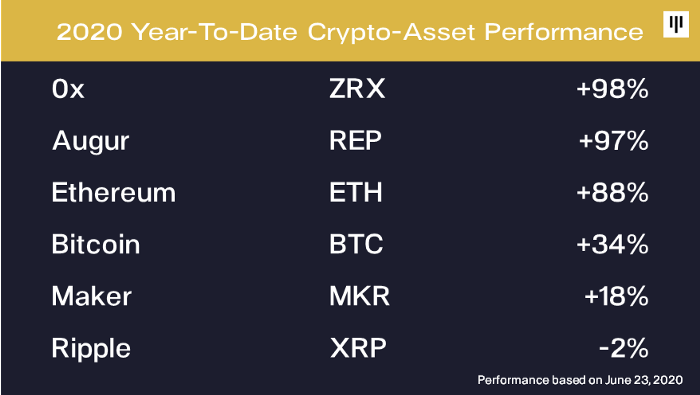 During cryptocurrency bull markets, we expect assets outside of bitcoin (alt-coins or alts) to outperform. As a whole, they’re higher beta assets and people tend to buy them after buying bitcoin, which is usually their first crypto-asset purchase. This is similar to how peoples’ first stock purchases may be Apple or Amazon, but over time they buy more speculative small to mid-cap assets in addition to those large caps. Historically, alts haven’t outperformed until mid to late in the bull cycle. For instance, from Jan 1, 2016 to Dec 31, 2016 bitcoin’s share of the market dropped from 91% to 87%. But by the end of 2017 it was down to 38%. It’s currently sitting at 65%. The implication here is that over time we expect the performance gap between alts and bitcoin to widen over the course of the next year, with alts outperforming. 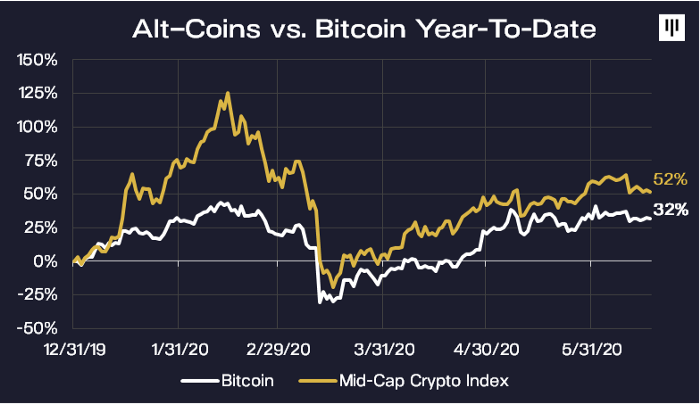 Since the start of this year, we can see that alt-coins have begun outperforming bitcoin (alts are represented in the chart by an index of 20 mid-cap cryptocurrencies), and we expect them to do so on and off over the remainder of 2020. But in 2021 — as the bull market matures — we expect for alts to gain a significantly larger market share relative to bitcoin. The chart below shows the same alt-coin index’s performance during the 2017 bull market. 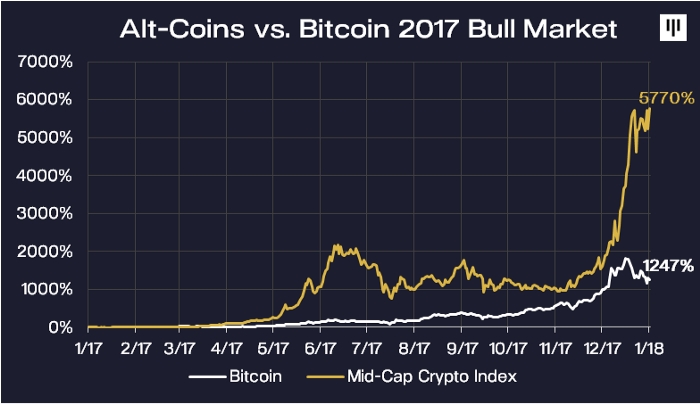 We believe that we’re currently in the early innings of a new crypto bull market cycle that should run until at least mid-2021. With proper selection, one can outperform bitcoin with a diversified portfolio including both large caps like bitcoin and ethereum and small to mid-cap alts even in the early innings of a bull market. Year-to-date, our multi-currency hedge fund is outperforming bitcoin by about 20 percentage points, as well as its benchmark (Bloomberg Galaxy Crypto Index) by about 30pp.

A New Environment of Technologies

If you’re thinking to yourself, “But hey, the 2017 alt-coin mania was different. It’ll never happen again.”

The ecosystem has matured over the past three years — the market has begun to separate the wheat from the chaff. I doubt we’ll see another token project with no working code raise tens of millions of dollars via an ICO. That’s not to say there aren’t any meaningless projects floating around — there are, but at a fraction of what 2017 had.

The “wheat” (in terms of use cases) is emerging to be non-debaseable store-of-value and decentralized finance. We’re a major proponent of bitcoin and believe a non-sovereign digital currency is inevitable. But we’re also focused on protocols that are enabling real world financial use cases and believe that most value will accrue to these assets on a long-term basis compared to utility/payment tokens. Since the market began trending upwards starting around end of 2019, this has played out well compared to a buy-and-hold strategy of bitcoin.

It really is more than just bitcoin.

Below are two charts depicting our portfolio weighting of bitcoin relative to the market and asset weighting based on use case. 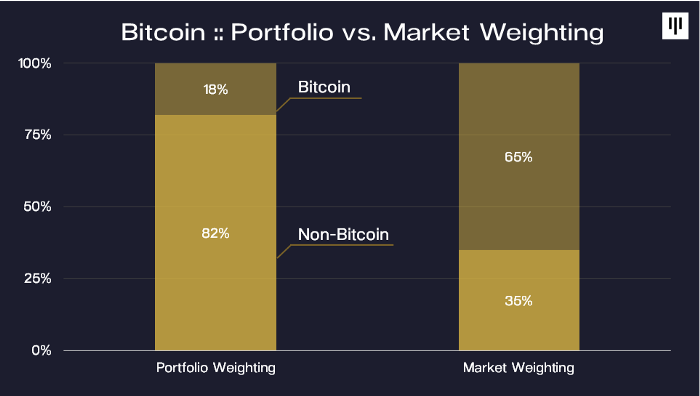 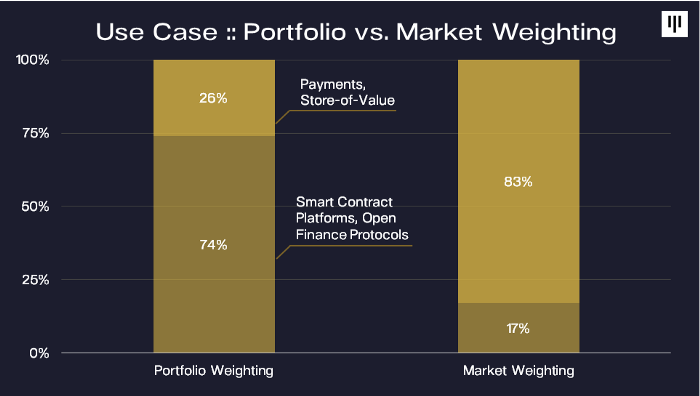 Recently Polkadot, Matic Network, and StarkWare have launched mainnet releases. This is really important for the space because for the first decade of crypto, the main popular blockchains have done about 10 transactions per second. Now that we’re seeing the first scalability solutions in the wild, we think that by the end of the year it’ll be feasible for projects in the space to scale to a couple hundred transactions per second if they integrate solutions like these. By the end of 2021 or 2022, we believe it’ll be easy and the norm to integrate scalability solutions. This is huge news because a lot of the most interesting decentralized finance applications require scale for their markets to be usable and more efficient.

You can read more on the launches of Polkadot, Matic Network, and StarkWare by clicking the hyperlinks.

Here we update our market views from the March Letter:

“We reduced our token risk about 15% for about a week. We now believe that the short-term high correlation with general markets is over and that crypto will trade independently.”

Crypto is beginning to trade independently of other assets. Crypto is up while most asset classes are down.

“In the five major S&P downdrafts since 2012, bitcoin’s correlation with stocks spiked sharply positive for 32 days in the initial movement, but tapered off to neutrality over an average of 71 days.”

Bitcoin-S&P 500 correlation has gradually trended down over the 98 days since the March down spike. It is below 0.50 as of today. We expect it to decay down to its low, long-term average over the coming months.

“We believe bitcoin will probably out-perform other tokens for a while….The increase in dominance historically lasted an average of approximately 4 months and an average gain of 7.8%. We believe that is likely to happen again.”

“Bitcoin dominance” — bitcoin’s share of the total cryptocurrency market — was 64.60% in mid-March. It peaked on May 19th at 68.73% and is now back at 64.60%. We expect it to decline as other cryptocurrencies begin to out-perform — as discussed above. 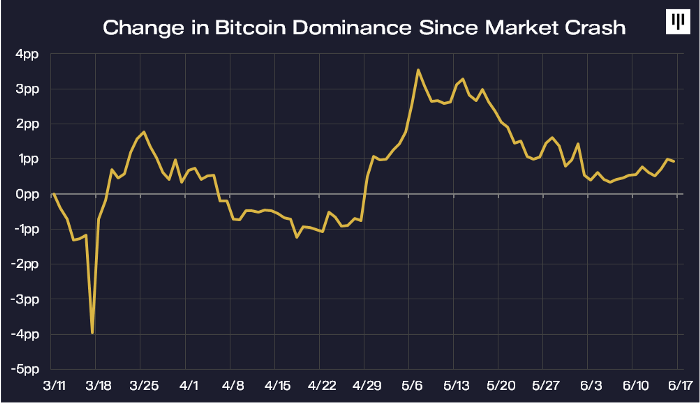 In our April letter, we published a potential framework for analyzing the impact of bitcoin halvings on price based on the stock-to-flow ratio across each halving. Based on the analysis, bitcoin could rise to $115,000 by August of next year if it follows a similar ratio to previous halvings.

We’ll continue to monitor bitcoin’s progress as we approach the summer of next year. 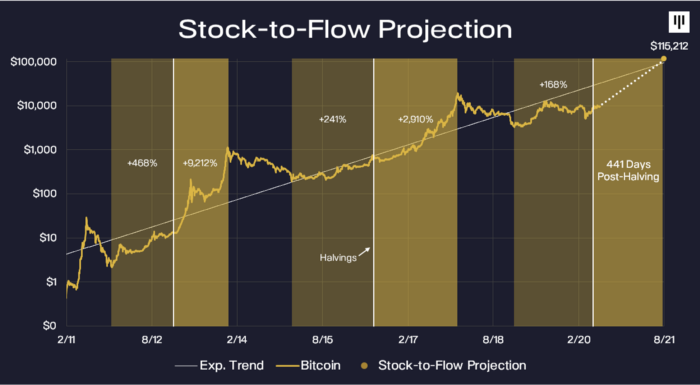 We invite you to join us on our upcoming conference call Go For Launch! — discussing the process of taking innovative technologies from ideation to launch. We will be joined by NEAR Protocol co-founder Illia Polosukhin and Colin Evran who leads Ecosystem at Protocol Labs, the development team behind Filecoin.

If you are interested in attending, please register here.

If you are interested in digging deeper on any of these themes or our funds, please contact Pantera’s Capital Formation team at +1–650–854–7000 or ir@panteracapital.com.

This website uses cookies to improve your experience while you navigate through the website. Out of these, the cookies that are categorized as necessary are stored on your browser as they are essential for the working of basic functionalities of the website. We also use third-party cookies that help us analyze and understand how you use this website. These cookies will be stored in your browser only with your consent. You also have the option to opt-out of these cookies. But opting out of some of these cookies may affect your browsing experience.
Necessary Always Enabled

Performance cookies are used to understand and analyze the key performance indexes of the website which helps in delivering a better user experience for the visitors.

Analytical cookies are used to understand how visitors interact with the website. These cookies help provide information on metrics the number of visitors, bounce rate, traffic source, etc.

Advertisement cookies are used to provide visitors with relevant ads and marketing campaigns. These cookies track visitors across websites and collect information to provide customized ads.

Other uncategorized cookies are those that are being analyzed and have not been classified into a category as yet.